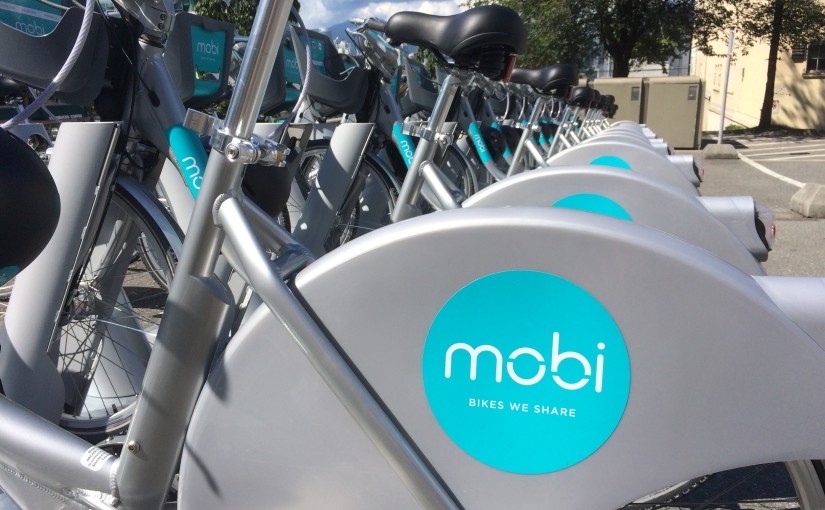 Tl;dr: I’m excited about Vancouver’s new bike share Mobi. The bikes are great, BC’s helmet law is frustrating, and I can’t wait to see how the bike share improves our city.

On Wednesday I biked 8 kilometres that would have normally been transit trips, all thanks to Mobi. Launched this week, Mobi is Vancouver’s new bike share and its A → B model is similar to Evo and Car2Go. There are stations across the core (with wider coverage on its way) where you can pick up and drop off Mobi bikes. This makes it easy for cycling to be a leg of a trip without needing to have your bike with you the entire time.

My trip today consisted of:

Even though I love biking for pleasure, past-me would have taken transit for steps 2 and 5. “Every transit trip is an interrupted walk” is a common phrase in the world of active transportation and now with my Compass card and my Mobi fob I can easily flow between walking, biking, and transit.

The Mobi bikes are sturdy and comfortable to ride. They come with a little key pad for unlocking the bikes, a helmet, a basket, and a nifty built-in lock that disappears into the handlebars. The seat was easy to raise and maximum height was appropriate for my 6’ tall body.

The step-through frame made mounting and dismounting a breeze, though I’m apparently used to leaning the frame against my thighs while standing. This lead to me almost dropping the bike a couple times, but I think I’ve got the hang of it now!

The seven speed gears were more than adequate for my ride, including coming up the hill on Ontario from False Creek to 10th. Mobi bikes are by no means speed demons, which I found forced me into a much more relaxing pace than I would normally take. Also, while I was being passed in downtown bike lanes, very rarely did I not catch up to the faster cyclists at lights.

One sticking point of the system is BC’s all-ages, everywhere in the province, mandatory helmet laws. To comply with this, each Mobi bike includes a helmet attached to the cable lock. Since I was among the first people to use the helmets and it wasn’t raining, it wasn’t so bad. However, I’m not looking forward to the 10 months of #raincouver or when someone with smelly hair / hair product uses it before me.

This isn’t really Mobi’s fault. They’ve provided an adequate solution to a problem that shouldn’t exist: mandatory helmet laws. Now don’t get me wrong, if I have to get hit by a car I’d rather be wearing a helmet, but given the choice, I’d really rather not be hit by that car in the first place.

Biking in Europe introduced me to the joys of cycling in a built environment and culture that respects cyclists. I felt completely comfortable riding without a helmet because I almost always had my own separated lane (not just a line of paint or the ever optimistic “sharrow”) and when I didn’t, the drivers were extremely respectful of me.

Biking in Downtown Vancouver is well on its way to being like this. For a year, my daily commute was a blissful 12 minute bike ride from the West End to Downtown entirely on the Comox, Hornby, and Dunsmuir separated bike routes. Other than the pesky law, I felt no need for a helmet in that situation.

Mobi’s initial service of the Downtown Peninsula, bounded by Arbutus Street, 16th Avenue, and Main Street will result in most trips taking place on existing and expanding separated bike facilitates. It will also encourage more people to cycle in that area, which will lead to more drivers being used to cyclists as well as more drivers having the opportunity to sometimes be cyclists themselves. All this will create safer conditions for cyclists, reducing the need for helmets. This video from Vox illustrates many of the reasons why bike share cyclists are safer in general.

Anecdotally speaking, while I was out riding Mobi, it seemed to me that about half the other cyclists I saw were either not wearing helmets, or were wearing them so incorrectly (loose, backwards, etc.) that they would be of no help.

It’s obvious that a one-size-fits-all helmet law isn’t working, so I hope this prompts new conversations about creating legislation that is supportive of cycling, public health, and accident harm reduction.

Overall, I’m really excited about Mobi. Making it easier for people to shift to or to include active transportation in their movement around the city has obvious environmental and physical health benefits, but it also has mental health and community benefits as well.

While I doubt anyone would be able to replace their private car exclusively with a Mobi membership, it does provide a solid addition to our available suite of mobility (walk, bike, transit, car shares) that is extremely competitive with private car ownership. Much like Modo has for car share, or the Bay Area Bike Share in San Francisco has for bikes, my hope for Mobi is to see it expand across our region and make intermodal mobility a possibility for everyone.