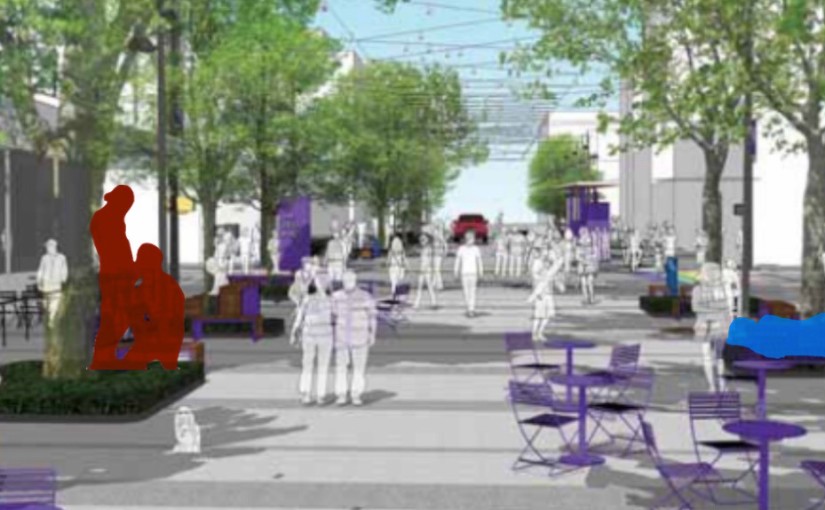 Read Part 1: Why Jim Deva Plaza will be a welcome addition to Davie Village

Last week I explored the importance of the proposed Jim Deva plaza.

A public space dedicated to the queer community would be a powerful symbol of acceptance, as well as a functional space that could be accessible to our whole community. Memorializing the life and work of Deva would further build on this symbol by inscribing his work of community building and challenging censorship and shame into the built environment for generations to come.

But I have some questions about our new space: Who will be welcome, and how will we be allowed to express ourselves there?

A public space is for the public, which to me means the people in a community as a whole. In contrast, a private space would only be for a specific selection of the whole community. However, there are restrictions on our public spaces. While they don’t explicitly exclude certain groups of people, the limitations on use of the space show for whom it is intended.

Most parks in Vancouver formally close at 10pm. This assumes that by this hour, the public have satisfied their needs to be outside and have returned to their private homes to sleep. But for  some parts of our community, 10pm is when the Davie Village starts to wake up!

When I lived in the Davie Village, I loved how there would be people awake and out at any given hour of the day. I haven’t experienced this 24-hour cycle anywhere else I’ve lived in the city.

I think it highly unlikely that anyone would expect our new plaza to empty, even if it formally “closed” that early in the night. However, I would be surprised if there wasn’t some later hour where at least from a policy perspective the plaza was no longer “open.”

One group I could see impacted by time restrictions on the space is queer youth. I’m pretty sure everyone’s on board with wanting the plaza to be a youth-friendly space, especially for those under 19.

But what happens when the plaza “closes?” Do they get sent home? What if they don’t have homes?

If queer youth are wanted in the space, what about queer homeless youth? Some of the design choices in the presentation boards show a bias against these members of our community.

For example, the illustration of benches for the plaza features central armrests to prevent someone from lying down on it. This type of bench is deliberately designed to prevent people from sleeping on it.

I’m not interested in a community space that deliberately excludes some of the most marginalized members of our community.

Another piece I wonder about is how having community space “legitimized” by the city will shape its uses and the ways in which we’ll be able to express ourselves in it.

Coming of age in Victoria in the late 2000s there was no semblance of a gay village. There were few explicit or exclusively queer public spaces; definitely no rainbow banners or crosswalks. But that didn’t mean we couldn’t find each other.

The subversive use of public space, the queering of otherwise “normative” public space, was a powerful tool that allowed us to be simultaneously visible and hidden in plain sight.

Sexuality is a huge part of why we have been marginalized and also why we gather as a community. That means it’s going to be an important part of how we create space together.

So will Jim Deva Plaza be a space for cruising? Or will we be more concerned with “decency?”

“This place needs to be a space inspired by Jim’s lifelong passion for freedom of sexuality and freedom from censorship.”

The kind of space we produce deeply influences the kind of society we have. If we create a public space that excludes our most marginalized members and sanitizes our sexuality, that will be the society we are creating.

Is that the society we want?