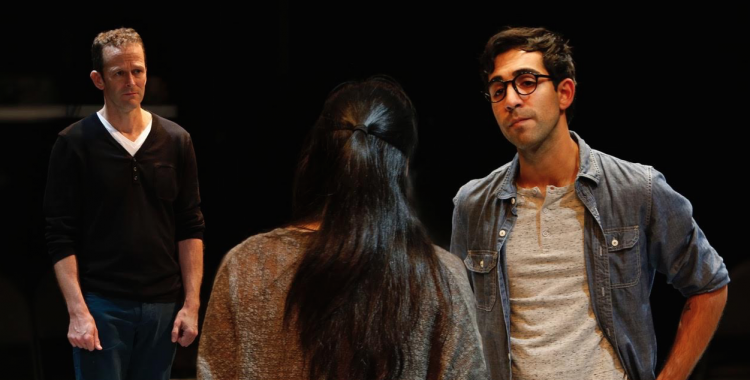 Maybe I’m biased because my best friend is bisexual and polyamorous, but when a gay man with a long-term boyfriend falls in love with a woman my response is basically, “So?”

Or maybe my bias comes from my belief that love is not a finite resource. That my gain doesn’t have to come at someone else’s loss.

Wherever it comes from, this bias made the plot of Rumble Theatre’s new production of Cock rather perplexing to me.

I want to affirm that bisexuals exist. The B in LGBT doesn’t stand for bacon.

Unfortunately, many people seem to think that bisexual is just a euphemism for someone’s who’s actually gay or straight but in denial. Or it’s a masc / str8 acting way to say gay, or simply a stepping stone on the yellow brick road of coming out. I want to tell you that there are also honest-to-goddess people who are bisexuals all the time. I’m friends with them, I’ve had sex with them, I’ve even dated them.

So when Cock’s main character John is trying to figure out if he actually loves his boyfriend (and is thus gay), or if his new feelings for the woman are real (presumably making him straight), I just want to shout: “Why not both?!”

To this, the characters in Cock respond: “Of course it’s okay to like both, but not at the same time!”

There’s huge pressure put on John to choose not just who he wants to be with, but ultimately to figure out what that makes him. To choose a side.

This kind of us-versus-them zero-sum thinking frustrates me to no end.

We live in a culture where we have way more food, shelter, clothing, gadgets and media than we could ever need. Yet we’re so scared we might personally not get enough that we hoard and control access to the point where many members of our society go without even the basics.

And then we turn around and apply this same thinking to our relationships.

We essentially tell the people we care most about that “I need to have 100 percent of your love and sex, and I will defend this from anyone who might threaten it!”

We don’t (usually) have this kind of thinking for other relationships. “You have another friend? How could you betray me like this?!” or “Sorry second child, I used up all my love on your older sibling,” are not generally acceptable ways of treating our friends or children.

One of the great gifts of the queer community is our opportunity to do things differently and evolve culture.

To challenge an either-or binary and say both instead.

To be vulnerable and intimate with more people in new ways.

To follow the lead of our heart with wild abandon, instead of letting ourselves love in only societally approved ways.

And to love our deviance wholeheartedly.